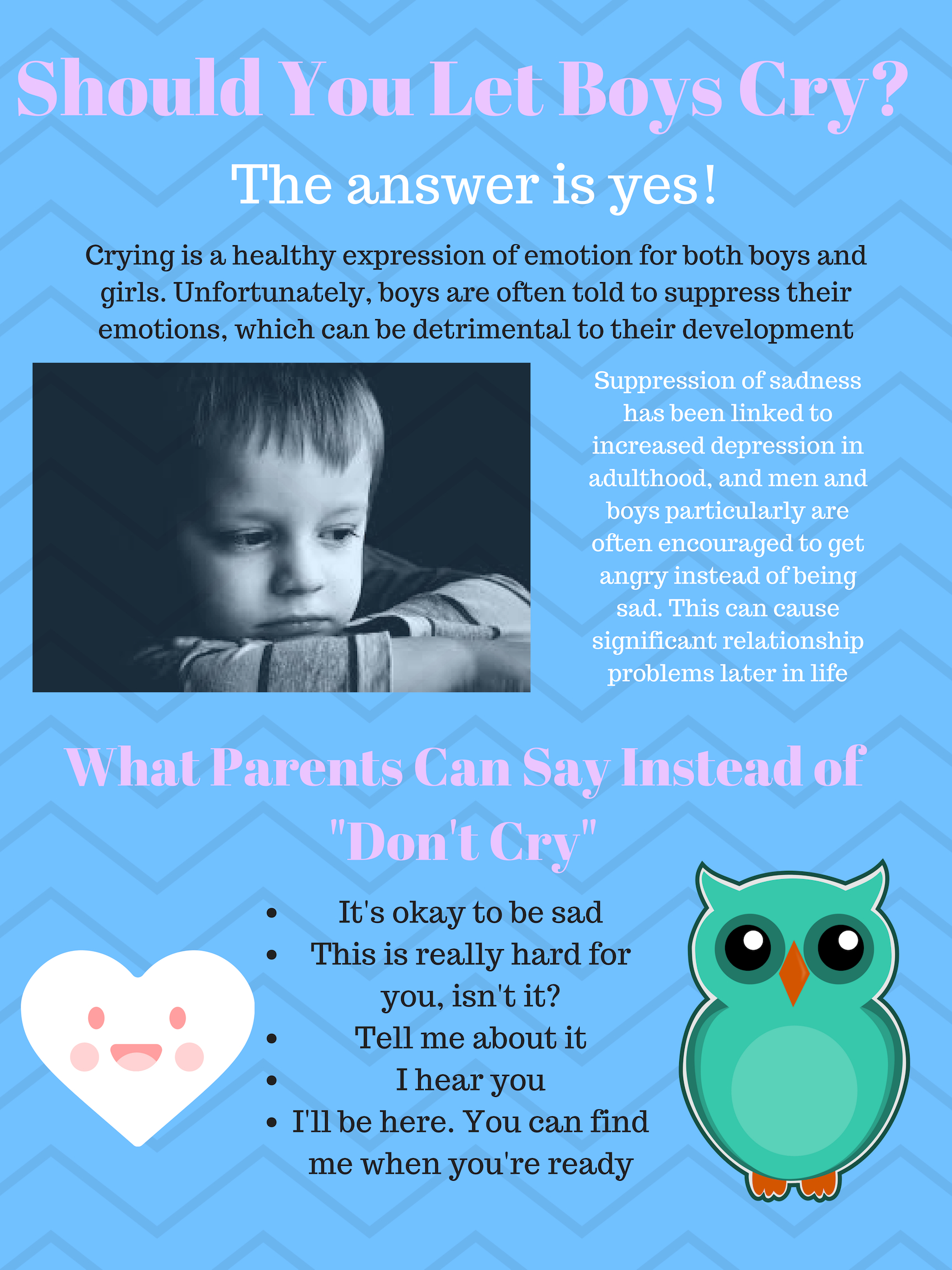 “You’re being a little girl. Do we need to get you a little pink dress? Be a big boy. Quit crying!”, a dad yelled at his son.

I was standing in line at the grocery store as I watched the meltdown unfold. The child was bawling after he had slipped and fallen on the floor. It took quite a bit of self-restraint to not say anything. Why couldn’t this boy cry? He was obviously hurt and possibly embarrassed from the fall. He was being told by his dad at a very fundamental age that crying – even when in pain- is bad. What emotion does that leave for young boys to feel and show?

Anger is often a secondary emotion when sadness is suppressed.

What may sound like a harmless comment can hold lifelong consequences, especially where children’s emotional development is concerned. Children learn very young which emotional expressions will be reprimanded versus which ones will be treated with more respect. For example, the phrase “Boys don’t cry,” carries several messages of invalidation. By saying don’t cry, the most natural human response to sadness is maligned, pushed aside as something inappropriate and undesirable. Even more harmful is the addition of boys; by framing the “don’t cry” message within the context of gender, this simple phrase invalidates a vital part of the child’s identity, essentially telling them that crying—and, by extension, sadness—removes their status as a male. A four-year-old who hears “real boys don’t cry” might truly believe that crying makes him literally less of a boy, and so he will begin emotionally suppressing his sadness out of fear of losing that identity. Older children, on the other hand, will instead hear the phrase as the insult it is often meant to be, and therefore respond to the statement as an overt act of discipline, discouraging the crying behavior and suppressing emotion even further.

The act of crying contrasts sharply from how parents often respond to anger in young boys. Instead of being met with “boys don’t get angry,” a child’s expression of anger is often taken more seriously. Parents are more likely to ask what triggered the anger, validate that feeling with quiet questions, and provide alternative ways to express the emotion. In some cases, a male child’s anger is even treated positively. Take, for example, the viral videos of young toddlers engaging in aggressive acts of anger, like swearing or throwing things. Even if it is well-intentioned, laughing at a child’s angry outbursts conveys to them that anger is okay and even desirable, while crying is not. The result of this emotion policing is that boys are trained to respond to all negative emotions with anger, which can create significant relationship problems later in life.

Join us for our next post in our “Let Boys Cry” series to learn how emotional suppression affects men in adulthood.