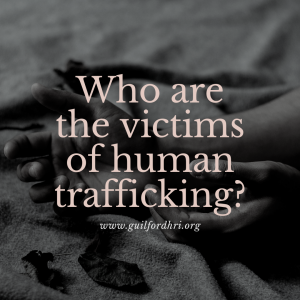 By Eleanor Beeslaar and Maria Harkins, Family Service of the Piedmont

Now that we have a better understanding of what human trafficking is, we’ll take a closer look at who the victims are, some common misconceptions about victims, and how traffickers force, control, and coerce victims.

Who are the victims of human trafficking?

Vctims of human trafficking can be any age, race, ethnicity, gender, nationality, or level of education. They come from diverse socioeconomic backgrounds, have varying immigration statuses, and they can be from any community (3).

Though anyone can be at risk for human trafficking, there are certain risk factors that increase the likelihood of being targeted. Traffickers often target victims who are in more vulnerable positions and prey on individuals who experience poverty, homelessness, domestic violence, and social discrimination (6). Youth who are homeless or have runaway from home are especially at risk for becoming victims of human trafficking (6). Some victims of human trafficking are brought into the U.S. from other countries, often on work or student visas. Traffickers control these victims by withholding documents, such as visas or identification, and exploiting the victims’ unfamiliarity with their surroundings and the culture, laws, and language in the U.S. (6).

Traffickers also use the internet and social media to target victims (1). They have people who search internet chat rooms looking for vulnerable victims, and they may lure victims by advertising false job opportunities or building an intimate relationship with them (4). There are online safety precautions your family can take to prevent human trafficking. You can find more information about precautions in our blog post this Thursday!

What are some common misconceptions about victims of human trafficking?

Though awareness about human trafficking is increasing, there are still misconceptions about the victims. We will take a look at some of these misconceptions and discuss the reasons they are not true.

How do traffickers force, coerce, and control victims?

Human traffickers use force, fraud, coercion, threats, lies, and manipulation to lure and trap their victims. They exploit victims’ vulnerabilities and take away their power and autonomy. They also make promises to address a victim’s needs, such as employment, food, shelter, etc. Because of this, victims may feel dependent on the trafficker and unable to leave the situation (6).

Traffickers may use physical abuse and force to control victims. This may include forcing victims to take drugs, leading to addiction and dependency on the trafficker. However, more commonly, traffickers use psychological means of control, such as manipulating victims to believe that they love or need the trafficker. They use threats and other psychological tactics to instill fear, preventing the victims from feeling that they have any personal agency and are unable to leave (1). Traffickers withhold immigration and identification documents (visas, passports, green cards, etc.) and threaten imprisonment or deportation if victims contact authorities (1). They also threaten the safety of the victims’ families or threaten to expose the victim’s circumstances to their families, which can lead to feelings or fear and shame (1). Traffickers also control victims by withholding and/or controlling their money. They may also force and control victims through debt bondage, where the victims are told that they have an undefined or increasing amount of debt (1).

Traffickers may use a combination of these different tactics to coerce, control, and manipulate victims. It is important to be aware of the complexity of this issue and understand that victims often have little or no power or autonomy in their situation.

Maria Harkins has over a decade of experience working directly with victims of Domestic Violence and Sexual Assault. As a seasoned advocate she is passionate about human rights. A native to Puerto Rico and fluent in both Spanish and English, Maria worked directly with the Latino and immigrant population. With an extensive background in human services she is now the Human Trafficking Outreach Specialist for Family Service of the Piedmont. She holds an Associate Degree in Business from Boston University, and a Computer Engineering Certification from Control Data Institute in NYC. Prior to taking on the role of an advocate Maria worked for Digital Equipment Corporation in Massachusetts where she was one of the first women to work as a Computer Engineer.

Maria is a mother of two wonderful adult children. She loves music, art, dancing and travelling. In her spare time, she enjoys spending time with her partner of six years, Wayne Epperly a local artist, visiting galleries and enjoying art. Her favorite quote is “In the winds of change we find our true direction”.

To learn more about Maria, visit our earlier post, Human Trafficking 101: Not in My Neighborhood, where you can find her full bio.